The objective is to attract money to the bank by advertising deposits.

The maximum interest rate on deposits with Universal Bank increased from 18 % to 19 % per annum. Because of this, we developed the advertising slogan “Deposits are growing up” and pictured replacement of candles on the cake as an association with growing one year older (the deposit rate growth by 1 %). 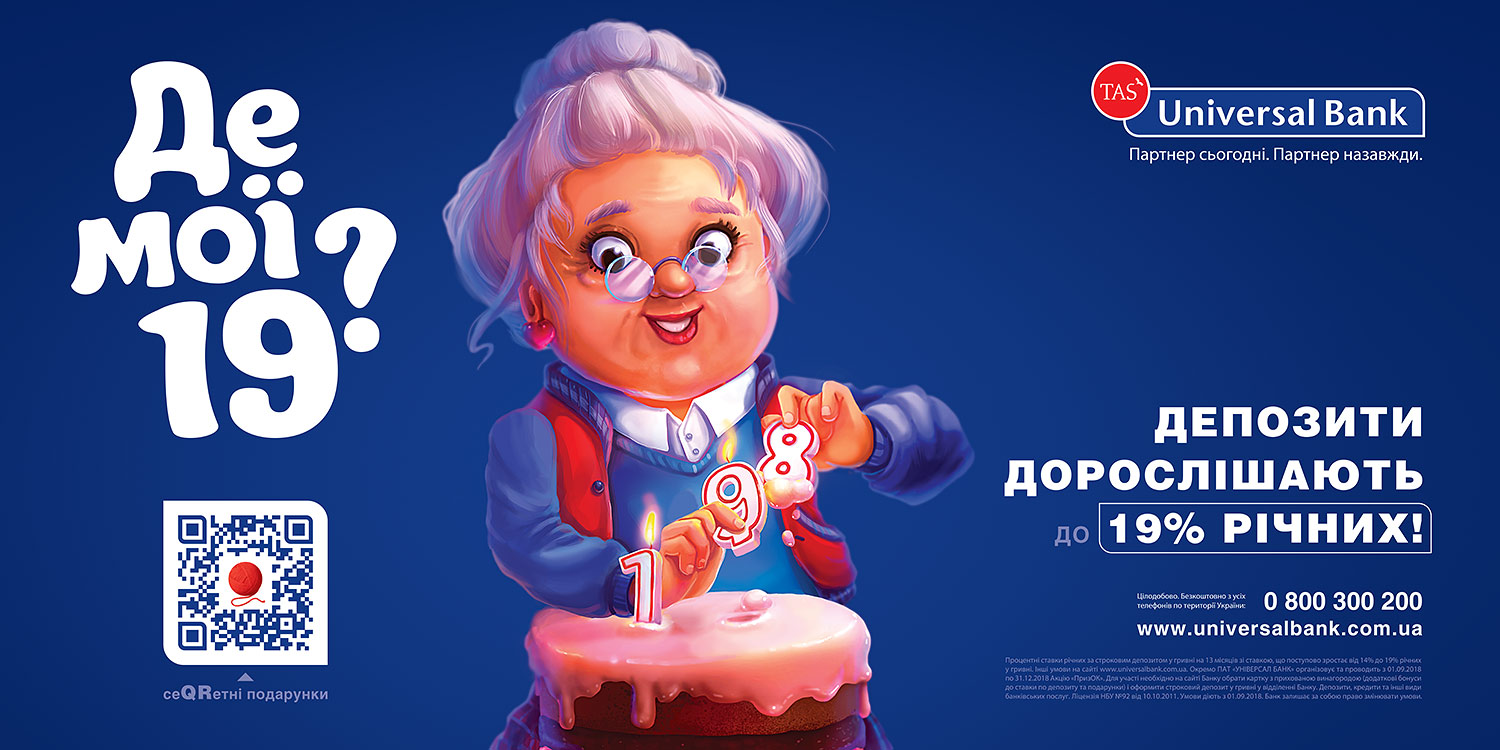 And considering that 19 % per annum in UAH is among the highest deposit rates in the market, we developed a second advertising slogan—“Really cool deposits”, and conveyed it with the image of a cool rocker. 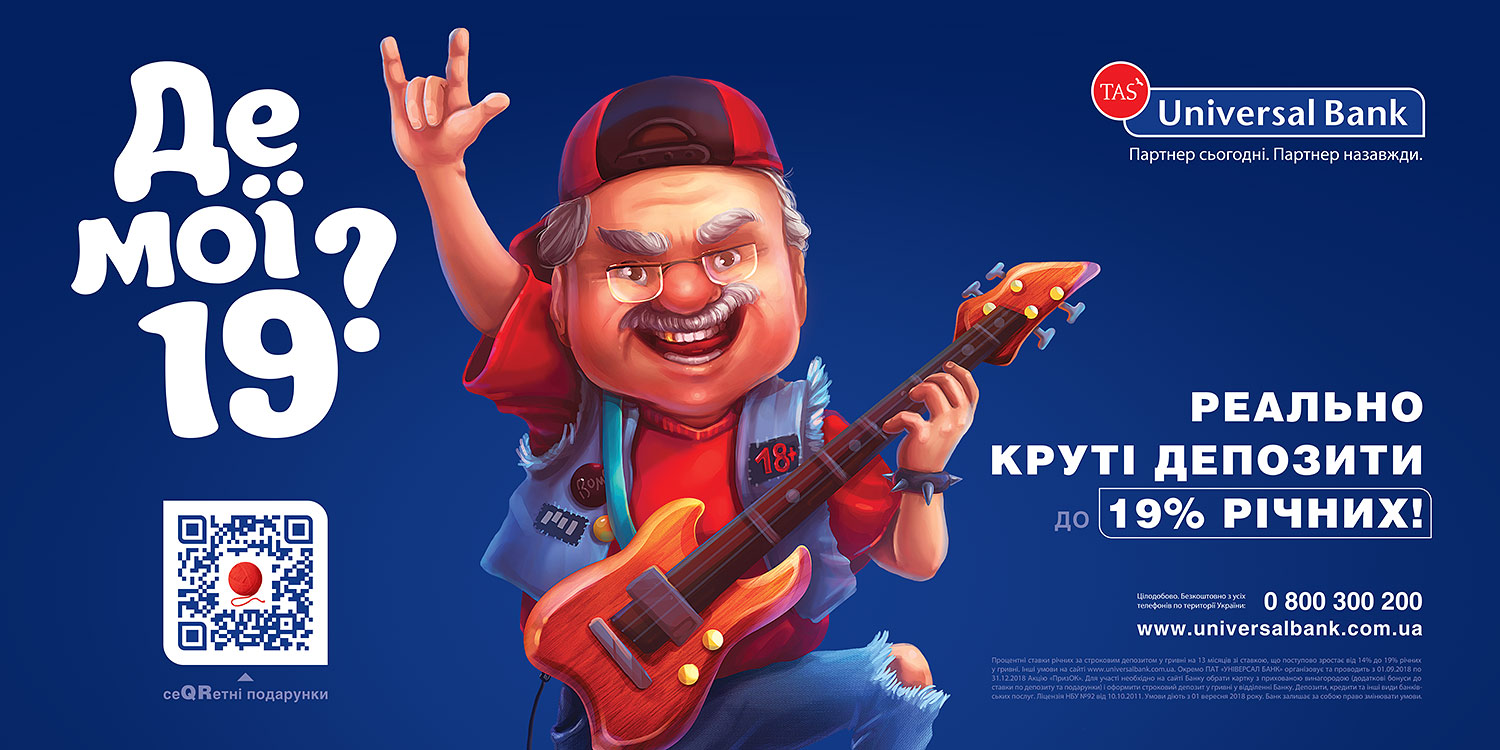 The maximum interest rate can be obtained as a bonus (premium) to the base deposit rate. Therefore, the logo of the advertising campaign was the phrase, “Where are my 19?” (sort of, give me that bonus). 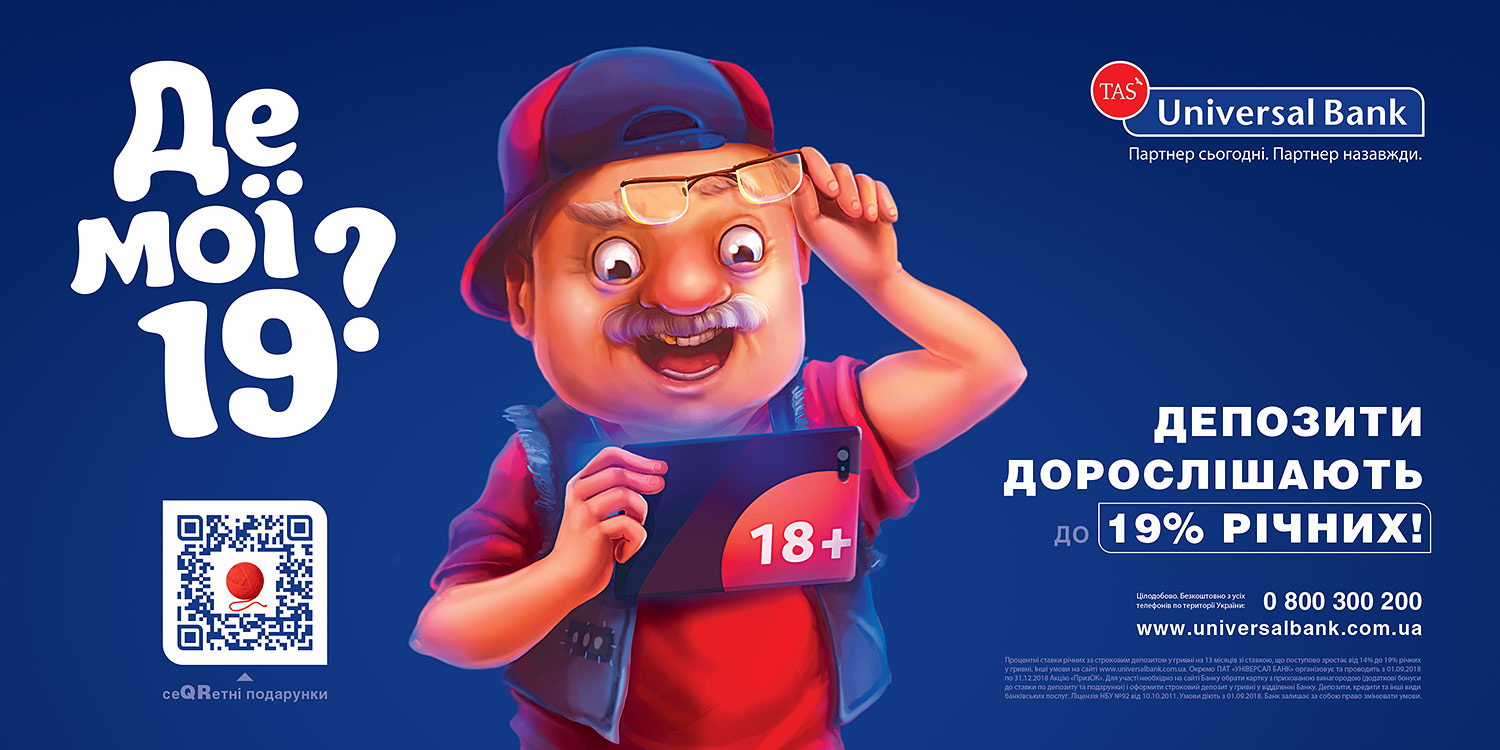 On the third ad, the inscription “18+” is clearly visible, which symbolizes an increase vs. the previous interest rate, as well as corresponds in its meaning to the “Deposits, are growing up” slogan. 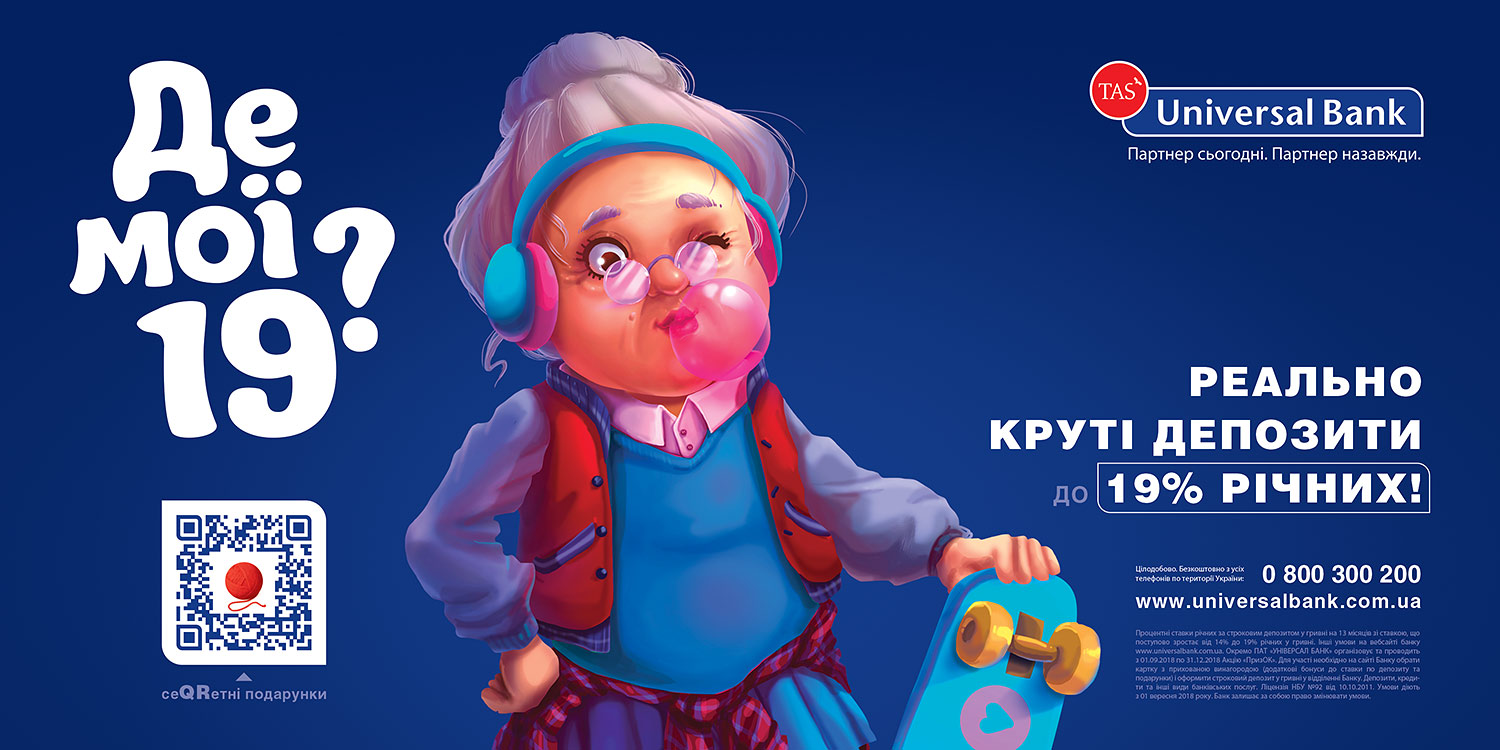 Active elderly people are protagonists of the advertising campaign, since the question “Where are my 19?” from them sounds as enjoyable nostalgia.

The advertising campaign logo on badges for the bank’s employees. 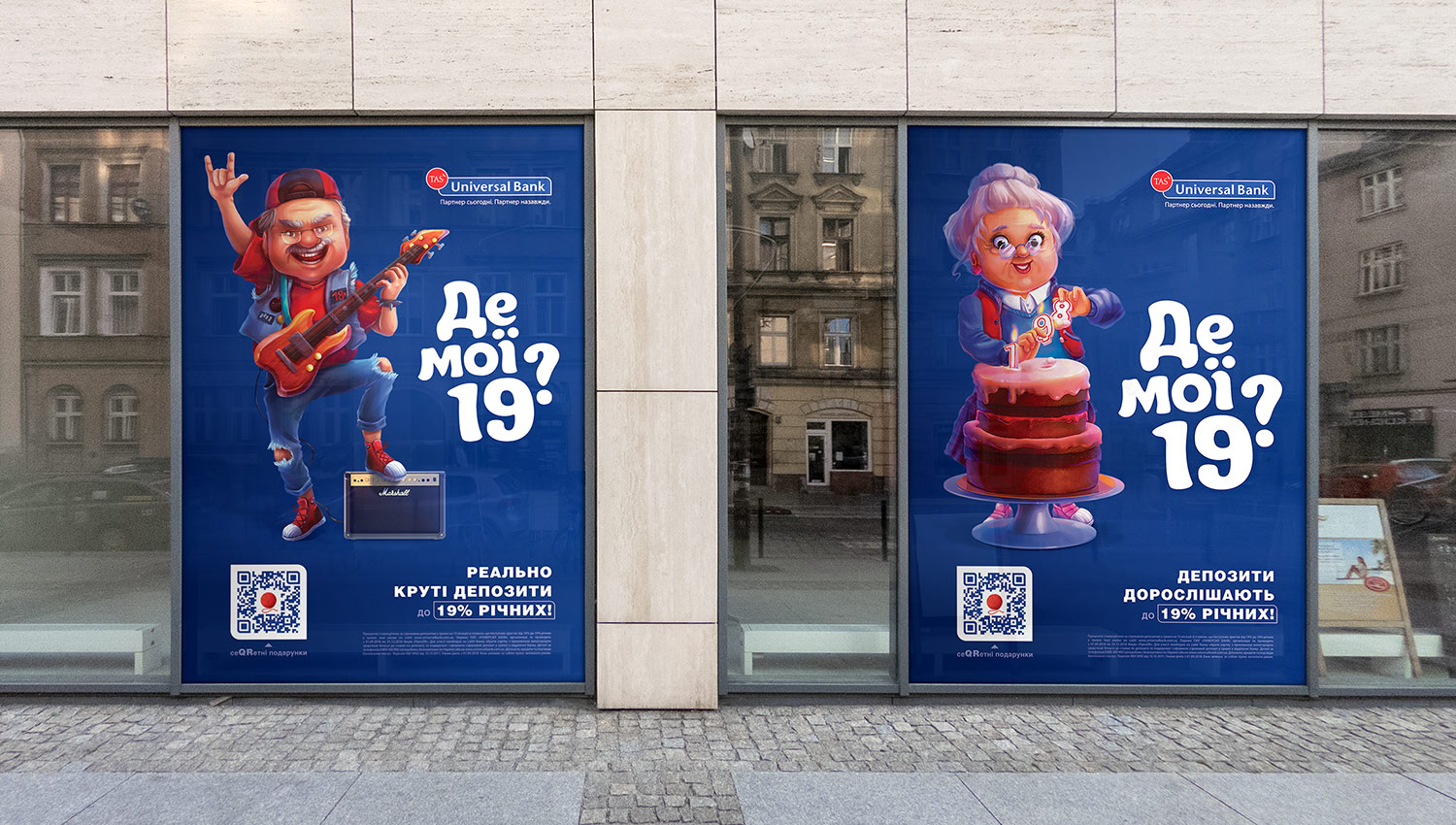 Due to the colorful illustrations and the well-thought-out idea, Universal Bank’s deposit advertising became the most recognizable banking advertisement in Ukraine. According to market research, consumers accurately identified the bank’s name based on the advertising layout without looking at the logo. While the inflow of deposits exceeded the bank’s expectations. The task was successfully completed! 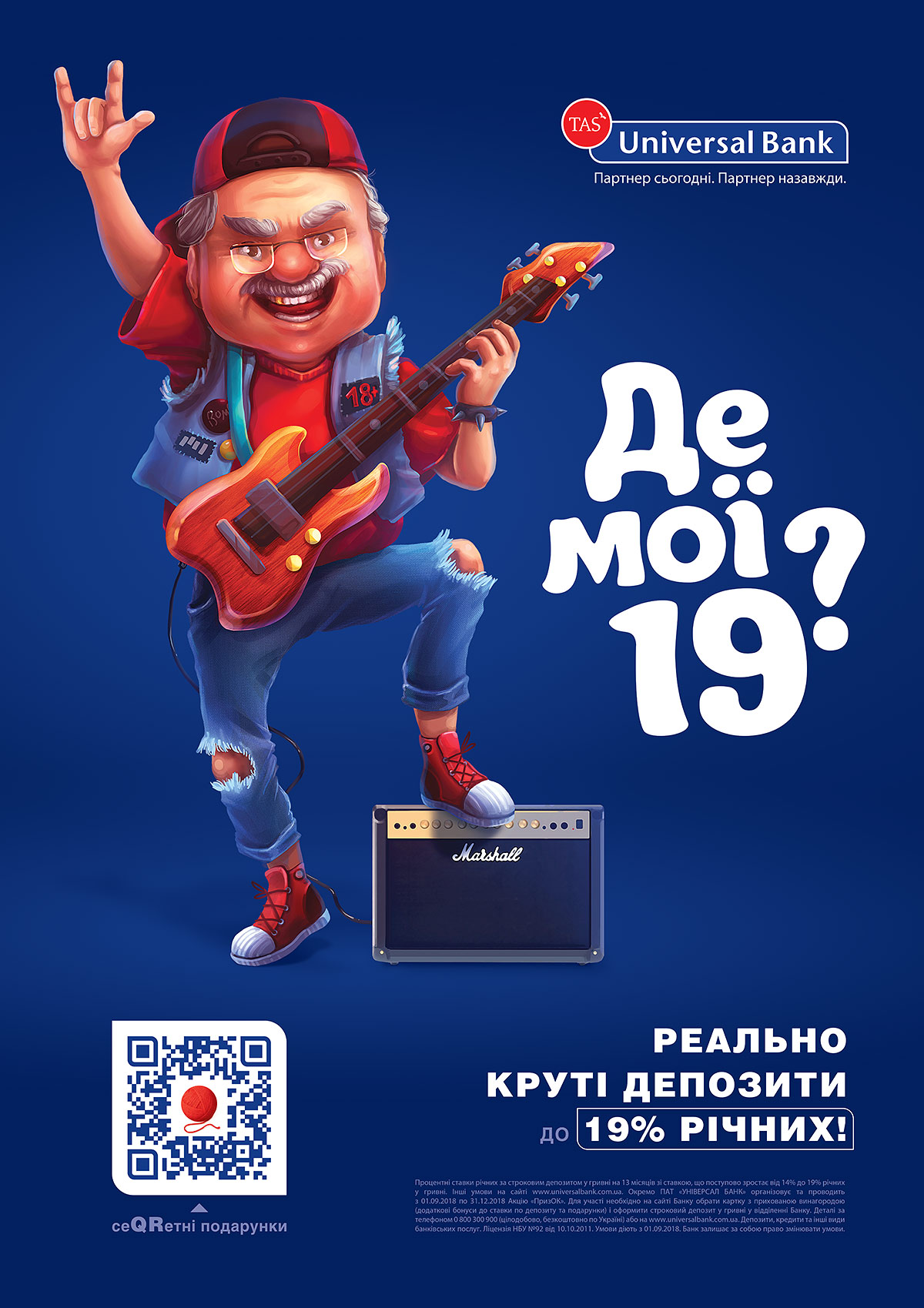 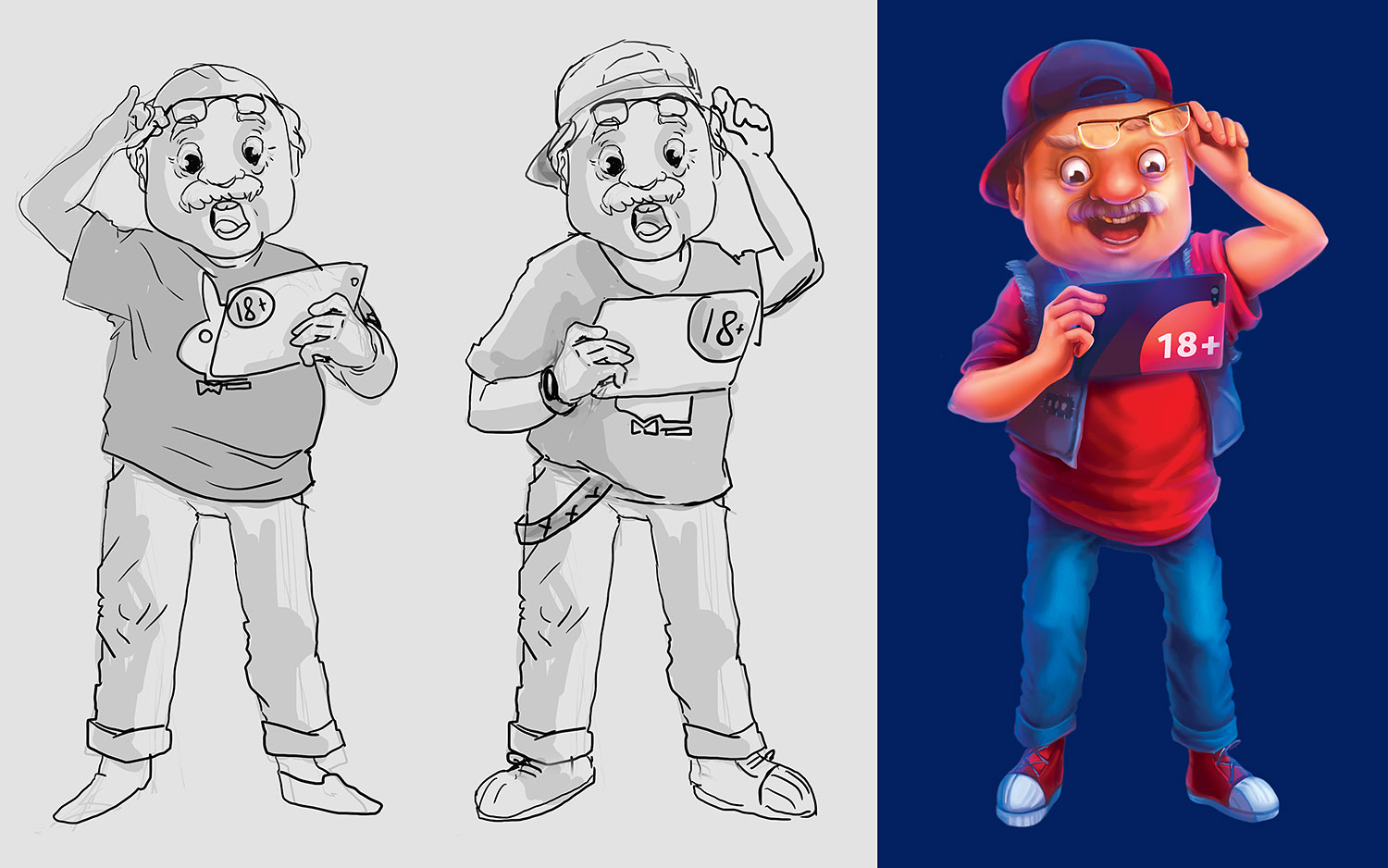 Drawing characters for the advertising campaign. 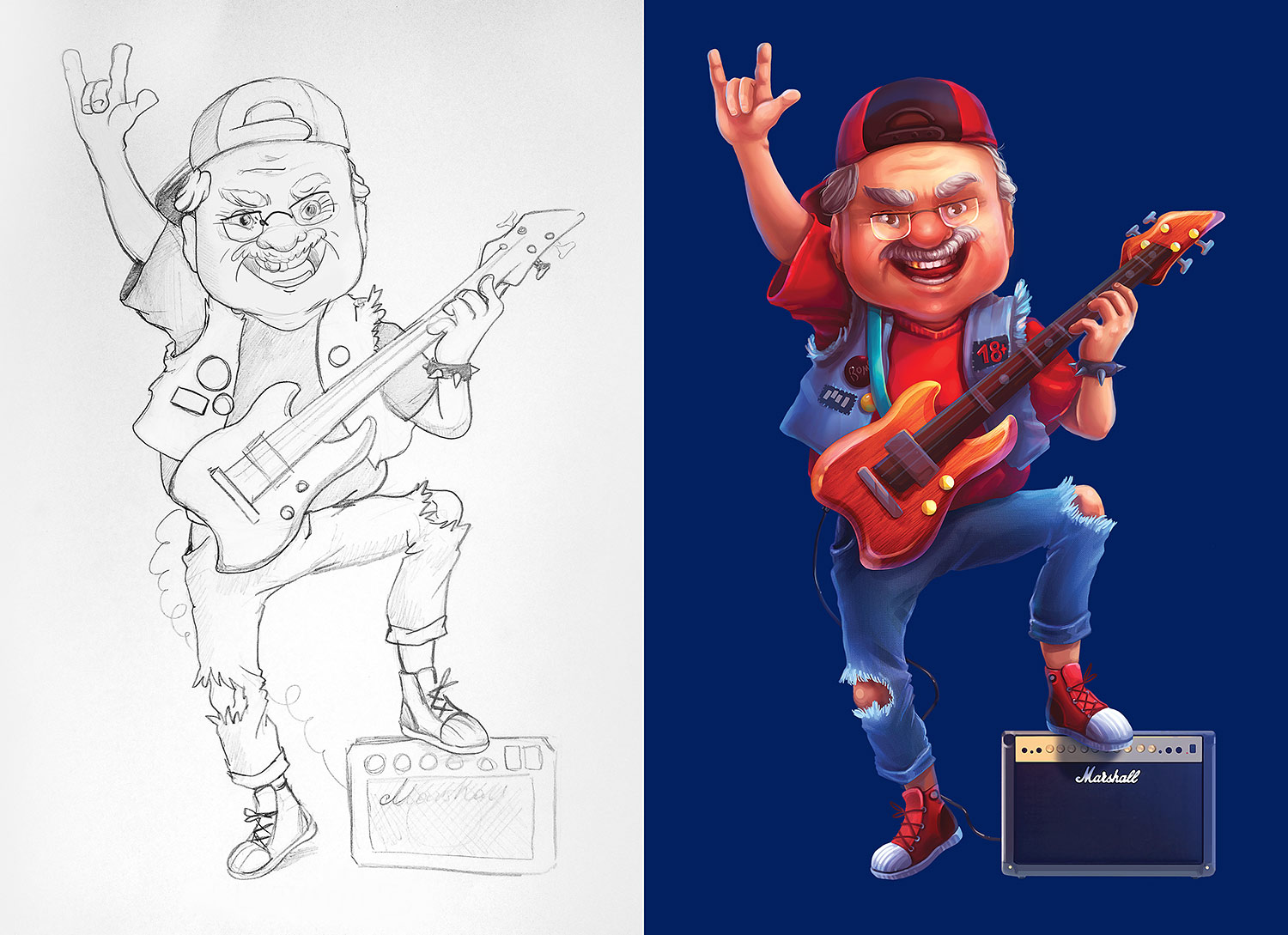 An elderly rocker and a skateboarder granny. 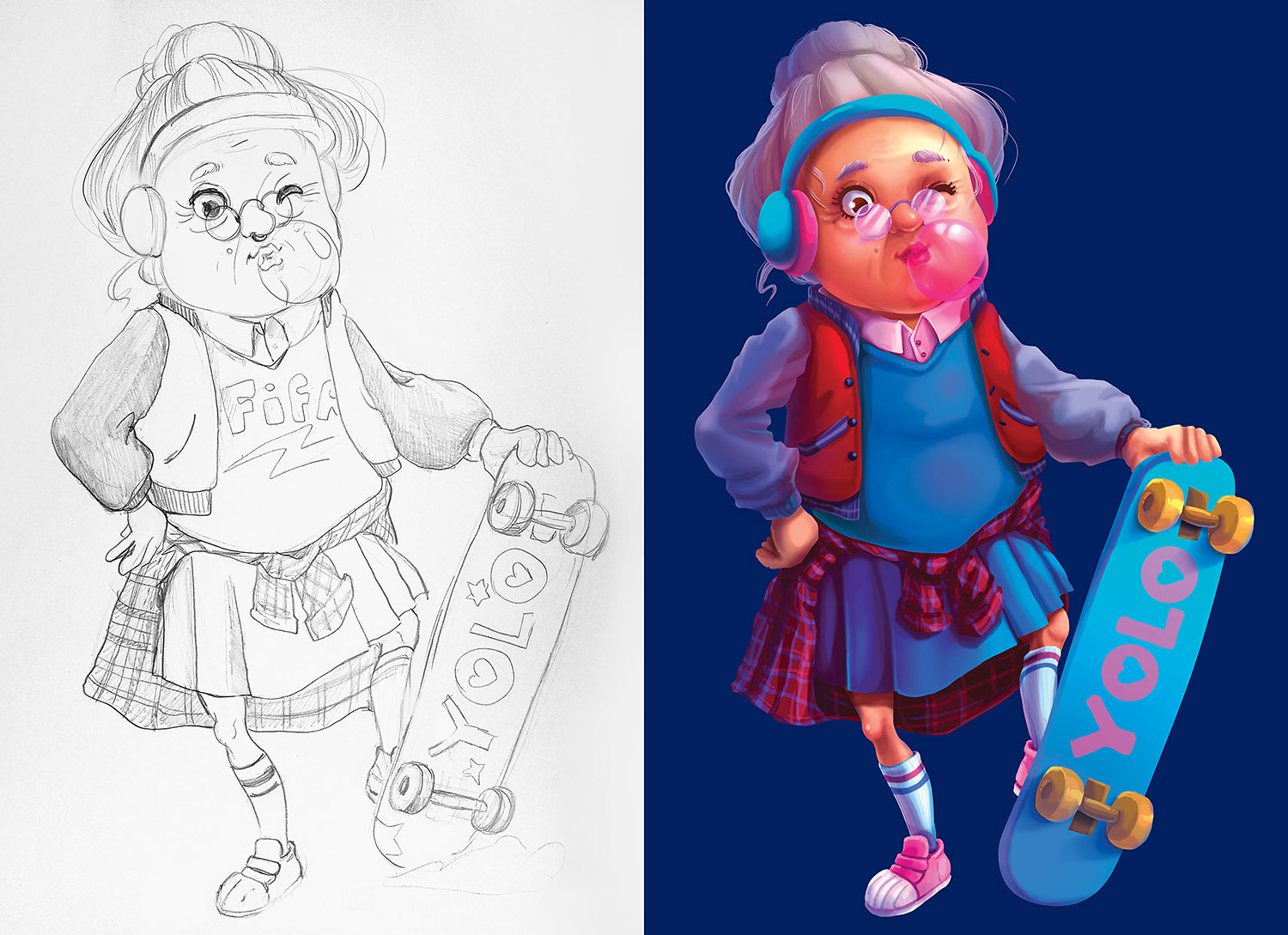 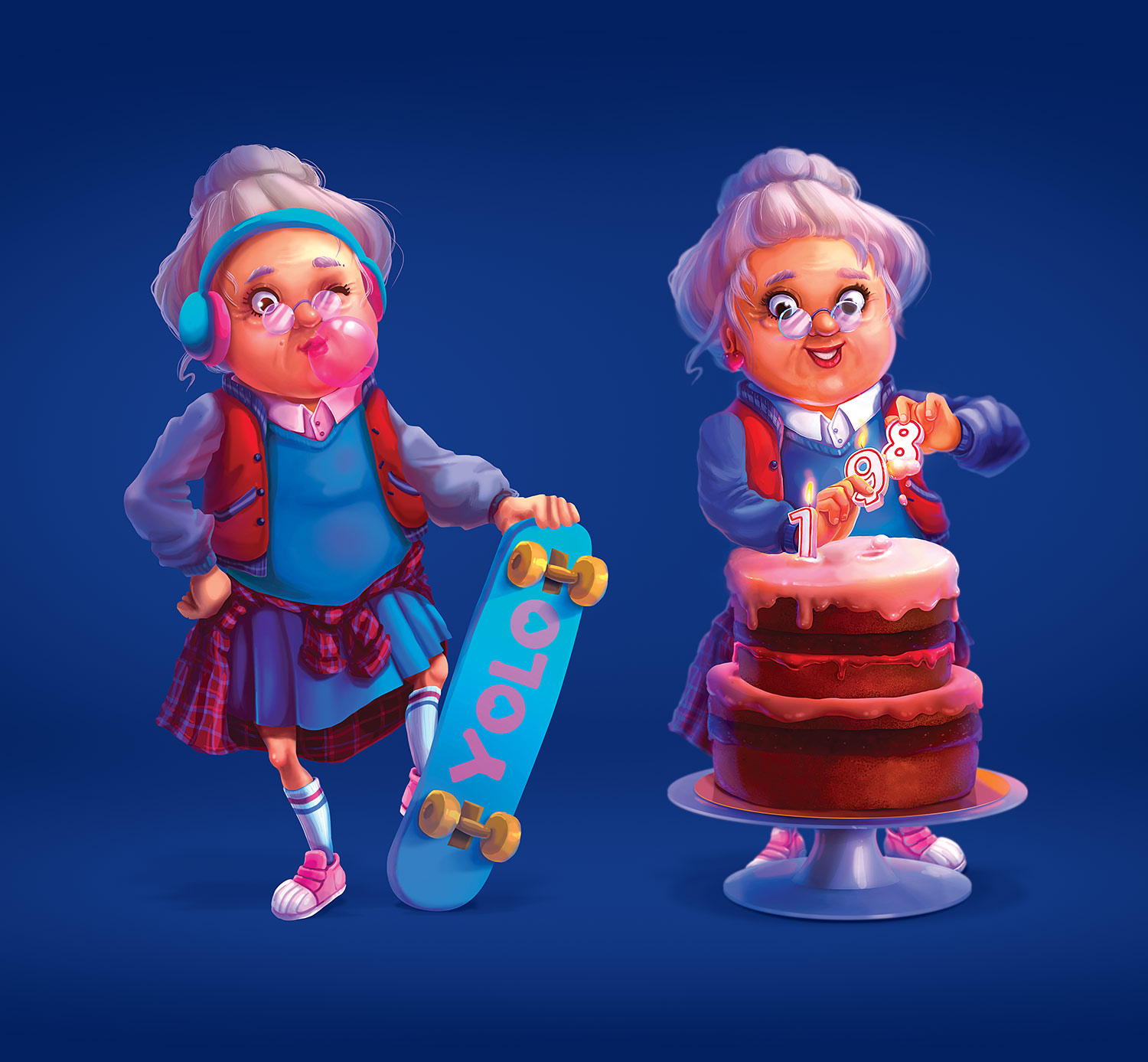 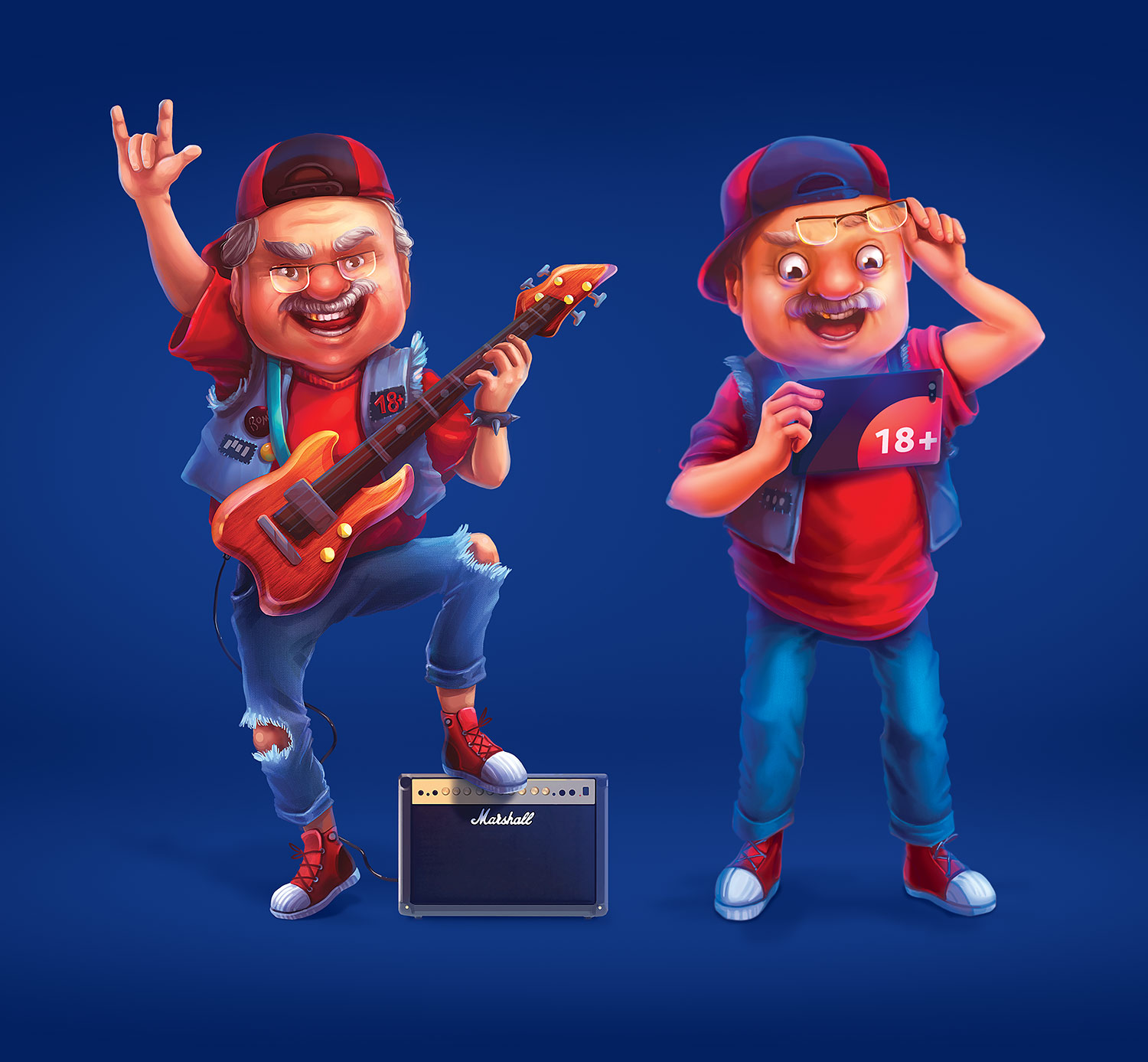 Slogan, logo and the interior of Altbank

A holder for Altbank Platinum and salary cards